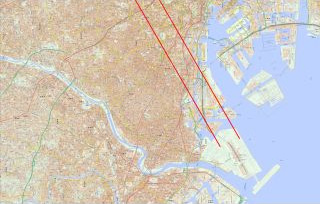 Current plans include flying airplanes at low altitudes through the middle of the Tokyo area. Many residents under the flight path have voiced concerns about noise problems arising, and demand is expected to increase throughout Japan as a whole.
With an eye toward the 2020 Olympics, a landing course that has planes fly low by traversing Tokyo from the southern part of Saitama has been devised in order to increase the number of flights into and out of Haneda Airport. Moreover, for planes taking off, the plan is to have the planes enter the area above the Arakawa area, where they will be flying at a lower altitude than ever before.
In consideration of such plans, it isn't a stretch to think that many municipalities are preparing to put countermeasures against noise into action. However, because the flights have not actually begun, it is difficult to tell how much noise will occur, resulting in a situation where deciding specific countermeasure methods is difficult.
Nihon Onkyo Engineering is engaged in addressing aircraft noise problems throughout Japan, including Chiba's Chiba City, Ichikawa City, and Urayasu City as well as Tokyo's Edogawa Ward and other areas along the current incoming flight course of airplanes bound for Haneda Airport. We will be able to propose a wide variety of countermeasures through an understanding of future impacts, including verification research before and after the implementation of countermeasures and constant monitoring.

By knowing the extent to which unwanted sounds can have an effect, we are able to naturally see the scale and scope of proposed countermeasures. At Nihon Onkyo Engineering, utilizing our proprietary technology cultivated through past projects, we can predict the range of unwanted sound influence from aircraft and show this unwanted sound on a contour map. 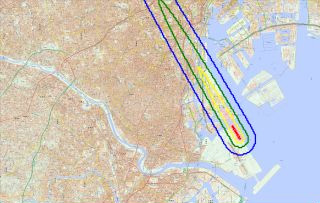 Being able to show the influence range of unwanted sound is an important tool. Simply saying that the noise is bothersome lacks persuasiveness, even if the listener agrees. Understanding the specific range of impact allows for creation of a more appropriate countermeasure plan. Moreover, in addition to frequently used noise level evaluations and contour diagrams showing evaluation values of unwanted sounds from aircraft, we can also produce various contour maps that more accurately reflect the feelings of residents. For example, examining municipality-created diagrams showing the number of people affected by unwanted sounds according to location may make it possible for airport managers to determine a flight course that affects less individuals.

Importance of pre- and post-service surveying

In congested metropolitan areas, a wide variety of sounds can be heard, from cars and trains to people simply going about their daily activities. In reality, measuring aircraft noise under such situations is incredibly difficult.
In addition, a large number of aircraft are constantly overhead. Although many people tend to be unaware of background noise, there are always some concerned residents who are constantly watching aircraft and listening for the slightest noises. For this reason it is important to accurately measure aircraft noise both before and after service in order to perform comparisons.

Although the noise level waveforms are not distinct, the waves emitted by passing aircraft are easily recognized!
At Nihon Onkyo Engineering, the surveys we propose before and after services are as follows. 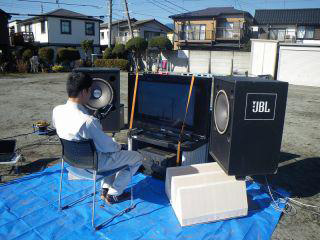 For residents, it is difficult to intuitively imagine the loudness associated with values such as 70 dB or 80 dB. In fact, being exposed to numbers alone can cause a sense of anxiety.
At Nihon Onkyo Engineering, we have prepared a tool that virtually reproduces the experience of aircraft noise exposure in order to ensure that these numbers are experienced with a more concrete sense of realism. This tool is being put to use in a variety of situations, from first-hand experiences allowing for better judgement in lawsuits involving roaring sounds to experiences that allow the listener to feel what residents exposed to the noise feel.